So, I’ve been engaged in a great back and forth conversation with Thomas Meininger of the Herkimer CSD about how we should describe the transformation of that occurs to f(x) when it is multiplied by a positive constant, i.e. y=k*f(x), especially when k is between 0 and 1.

Now, before you think this is something widely settled, it is, in fact not. I want to state that I’m not necessarily fixed on either, but want to point out that there is not universal agreement. I went through a couple of Algebra (2) with Trigonometry books this evening that are very well known.  I’m going to show you some images from these books. Click on any to see them much more clearly.

The first, Algebra with Trigonometry by Stewart et. al, went with Thomas’s preferred wording. Here’s a screen shot from the portion of the book that discussed this: 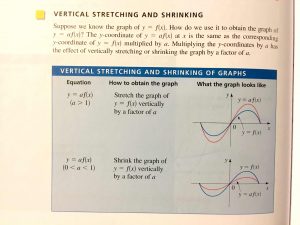 Notice that whether the graph is stretched or shrunk (love it!!!), they state that it is by a factor of a (in our example k). So, in my above example with y=1/3x^2, Stewart would say we shrunk the function vertically by a factor of 1/3.

But, in Cynthia Young’s excellent Algebra with Trigonometry book, we find the following: 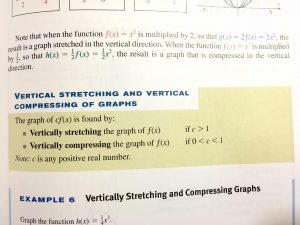 O.k. So, that doesn’t clarify anything because Cynthia doesn’t use any language about stretching or compressing “by a factor of c” in this definition. But, check out the following page from her problem set. Specifically look at Problem #18. Click on the image if you need to see it better. 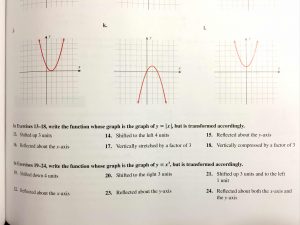 She asks us to write the function whose graph is y=|x| after a vertical compression by a factor of 3. So, this is in fact y=1/3*|x|. By the way, Cynthia is a well-known college professor whose excellent book was reviewed by over 50 editors. So, if you are of the opinion that everyone agrees with Stewart, there are many who apparently don’t. My wife, who is not a math teacher (she’s an animal nutritionist, how cool is that?) felt that it was better described as compressed by a factor of 3.

There are definitely unambiguous ways to describe these transformations. For example, we could say that the y-values on y=x^2 have been vertically scaled for y=1/3*x^2 such that its y-values are 1/3 of those of the original function, thus compressing it.  But, that’s pretty wordy for the typical teenager. We could simply say that the y-values have been vertically scaled by a factor of 1/3, thus omitting any mention of whether it is a compression or a stretch.

At the end of the day, this leaves a lot of questions in my head including:

Does it matter as long as we can assess what the students understand?

Should there be one way to describe these and who makes this decision? Apprently, NYSED leaves it up to us to guess.

Will we have the latitude on a free response question to give credit to a student who phrased it either way?

How should we phrase questions we ask kids? In other words, can I ask a student to write the equation of y=x^2 after a vertical compression by a factor of 5 or do I need to say 1/5?

Sometimes issues like this seem so clear if we are used to what we have learned in our own past or what we have taught at our own school. When I began teaching and our curriculum in New York State was clearly defined and controlled by New York State there was no question about what was acceptable or what wasn’t. But, then again, I began teaching in the era of Integrated Course I, Course II, and Course III when the exams were settled, the rubrics were clear, and you knew exactly what was acceptable and what wasn’t.

But, now, with NYSED’s lack of both guidance and transparency, we are left to wonder so many things. And, no, the Modules are not guidance nor are they required curriculum. In fact, the Governor’s Tasks Force on the Common Core Standards specifically recommends that districts be banned from requiring teachers use the Modules.

How’s that for irony? A ban on districts requiring their teachers use state provided curriculum from the state itself. Wow, you just can’t make this stuff up.

I’m interested in hearing what teachers think about this issue given that I will be putting out a new version of eMATHinstruction’s Common Core Algebra II in the spring and can certainly modify the lesson to bring it into alignment with what the majority of math teachers think, but I believe this might be difficult to determine. Still, if you have thoughts, please consider leaving them as a comment to this blog post and I’ll approve them as soon as I can.

2 thoughts on “Vertical Stretching and Compressing of Functions”