Ever since I wrote Common Core Algebra I, I’ve had numerous discussions with math teachers around the country who weighed in on the subject of intervals of increase and decrease of functions. In my answer key, I often include the x-coordinates of the turning points in the intervals, although I’m not entirely consistent on it.

So, their point was not lost on me. In fact, my inconsistency on the convention is actually consistent with the fact that the turning point x-values can either be included or excluded. I wrote a really lengthy post on why and won’t go into it at depth. If you want to read it, here’s the link:

Ultimately, my belief has always been that the Regents would take either convention. Of course, they never saw fit to clarify this point in their CC Algebra I standards clarifications. More on that later.

For all intents and purposes, though, the debate is now over because the January 2016 Common Core Algebra I exam had a free response question on it that included the question of a decreasing interval. Up to this point, we had only seen multiple choice questions and this issue didn’t arise in those.

Here’s Question #33 from this January. It’s a standard projectile motion question that we love so much. I like the question quite a bit because students can explore it on their calculator. Click on the image to see it better. 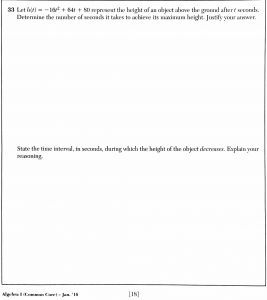 It’s the second part of the problem, where students are asked for the interval of time over which the height is decreasing. By the way, using whatever technique, the time to the peak height is 2 seconds.

Now, the first thing I looked at was the standard state rubric. My heart was beating. Would it state that we had to take off one point for the student including the 2 in the decreasing interval? What about 5 seconds when it hits the ground? Is the height decreasing there? Here’s the state rubric. Again, click to see clearer.

Wow! They didn’t even state the interval. Notice, they are quite clear on the time to the maximum being 2. But, they aren’t even willing to state what the “correct” interval is. Just that the student has given a “correct” interval with an explanation written.

O.k. Well, those of you who have graded these tests before now know where we turn to – the sample responses. For those of you not in the business, these are copious amounts of sample responses with the appropriate points given for the work shown. Here’s the first full credit response (4 points) they gave us: 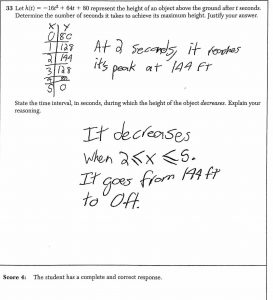 Oh, snap! The first full credit solution includes the turning point (and the endpoint). Most importantly, it states unequivocally that the student has a complete and correct response. Thus, that settles it for good. The turning points must be included for full credit. 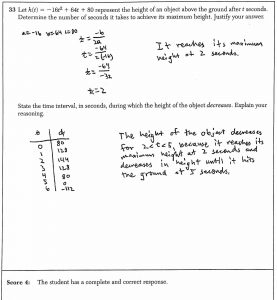 Wait, now they’re accepting 2<t<5 for full credit. Huh?!? I guess the turning point x-coordinate doesn’t have to be included.

So, I’m glad I won’t have to address that ever again. I’ll just refer to this post.

On a much larger picture, though, this illustrates something I have been very troubled by in the current transition to Common Core in New York – the lack of specificity in the standards. Seriously! There are so many issues out there that are completely predictable that need clarity like this one. The good and overworked folks up in Albany could just make a list to give us the clarity we need to create robust and consistent curriculum. Instead they try to get the word out in random forums, emails, and footnotes. I don’t know if this is some sort of philosophical change up there, but it makes is harder to do our jobs well.

I hope that with a new head of the Regents and change in the wind, they will consider making their expectations clear to us in very fine grained detail. This will allow us to craft our own stories of rich mathematics and not get bogged down in trying to answer questions about what will be on the exam and what will not.

Categories: Algebra I, Math Education Discussion
Categories
Archives
We use cookies to offer you a better browsing experience, analyze site traffic, and personalize content. Read about how we use cookies and how you can control them in our Privacy Policy. If you continue to use this site, you consent to our use of cookies.